Om I Michael Wiander I Historik I Varför Dexter I FAQ ​

The story behind the bestselling book

Michael Wiander, the author and creator of Dexter Olsson, reveals the story behind the Swedish Children's book success:

"Dexter is no hero, he's just an ordinary guy. But he wants to become a grown up and to be taken seriously!"

This is probably one of the greatest reasons why kids so easily relate to the main character. The "real" Dexter Olsson is my son Marcus, who participated in Sweden's Got Talent as a 7 year old little boy. He got to hear from the jury that he was too young, and this is why Dexter is faced with the same message in the book. The video below is from the TV recording of Sweden's Got Talent 2009.
Source: TV4, Sweden's Got Talent, 2009.
"Marcus played drums as a grown up, although he was only a kid."

Except for Sweden's Got Talent, Marcus also participated in the tv-serial 'I wan´t to become a star' (2009), together with the artist Zarah Larsson, among others. Within short we signed up for a private teacher, who inspired us to travel to the Music School 'Drummer's Collective' in New York. When Marcus turned 13 we then began to take yearly trips to New York, which was the starting point in Marcus musical career. The very same year Marcus had his first professional performance at the Nobel Price party (Nobel Night Cap) - a long solo performance with digital hand drums. As a 16 year old Marcus won the Swedish Jazz Championships and the rest is history. Today Marcus has played with big artists and is touring throughout Europe. The character Dexter Olsson portrays a kid who wants to become a grown up and to be taken seriously, but is stuck in a child's body - just like Marcus when he was 7 years old.

I would probably never have written a children's book if it hadn´t been for my daughter Luba, who read two books a week as a 9 year old girl. She requested a 'A long eternal series without horror and monsters'. We got her Harry Potter, but she didn´t like it, it was too hard to understand and a bit scary. When I first started out with my writing, I therefore decided to write a kind and friendly story, filled with everything I required myself as a kid. At that point in time I imagined a kid who's grandpa was an inventor and a secret agent. The secret attic was there from the beginning, but everything else in the story evolved as I was writing. I loved the French animated movie 'Once Upon A Time', and I'm also a big Star Wars-fan. With this said, my original thought was to incorporate facts, action and humour in an exciting adventure that never was to get boring - it was supposed to be like a film, but in the form of a book. 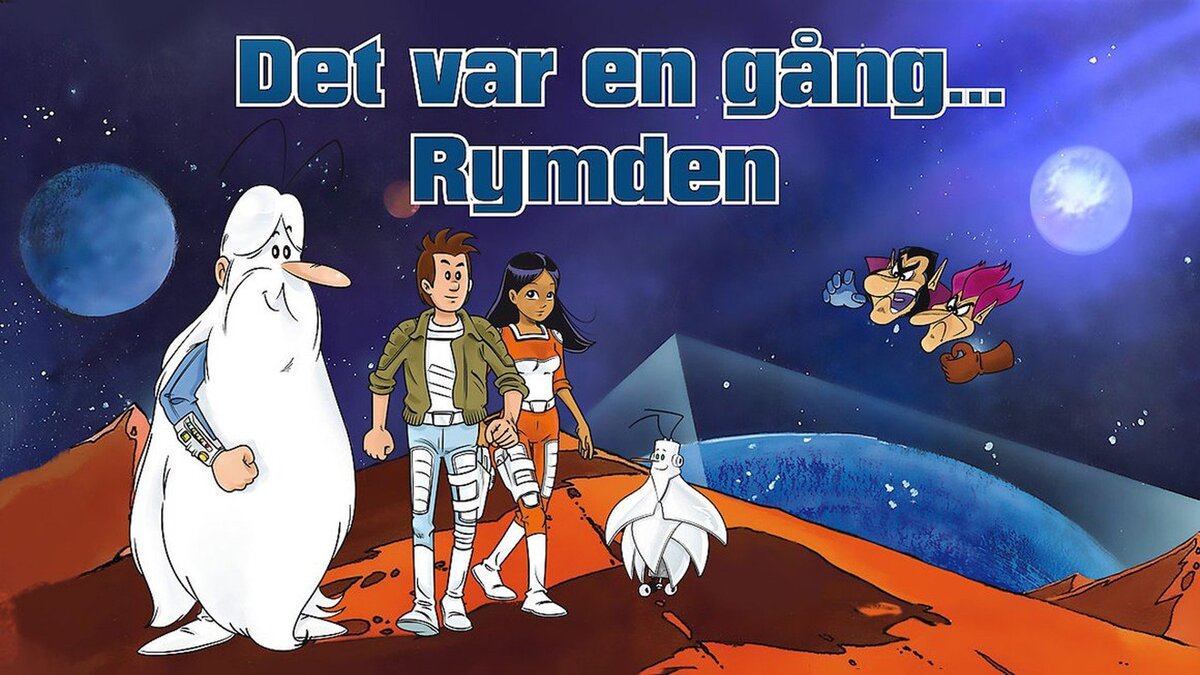 Source: rymdfilm.wordpress.com.
"I wrote the book during 15 years, but when it was finished no Publisher was interested."

Each and every Publisher in Sweden said no, but I knew that the book was needed, and that it was good. 30 pupils ages 9-10 years and 10 teachers had read the entire book and given it great reviews. I recall when the main Publisher Rabén & Sjögren, as the final out of 15 publishers rejected my script - that was the last nail in the coffin ... It happened during the school holiday, spring 2017, when I stepped out of my car at a petrol station. The telephone beeped and I saw the e-mail from Rabén & Sjögren. 'If they don´t want my book, I suppose nobody will', I thought, since Rabén & Sjögren accepted Pippi Longstockings, when Bonniers rejected it and let Astrid Lindgren down.

"I returned to the car and said: We have to publish the book ourselves ..."

'Never in my life', my wife replied. But this was the only way forward. By the autumn 2017 we released the book at Visto, a hybrid Publisher for self publishing (sister company to Idus, our current Publisher). When we took this decision, I thought 'why would we do it different than the biggest Publishers?' I reserved a booth at the Gothenburg Book Fair, arranged sponsor deals, advertisements in newspapers and social media. We did everything we could in our power to give the book the best kind of attention. I even hired two PR Consultants. But it still felt as if no one believed in the book. During the Book Fair we had 5 scheduled sales people, one of the coolest trade fair booths with prominent sponsors, a dressed up monkey etc. We sold approximately 500 books and I was disappointed, but today I understand that this was a great result. 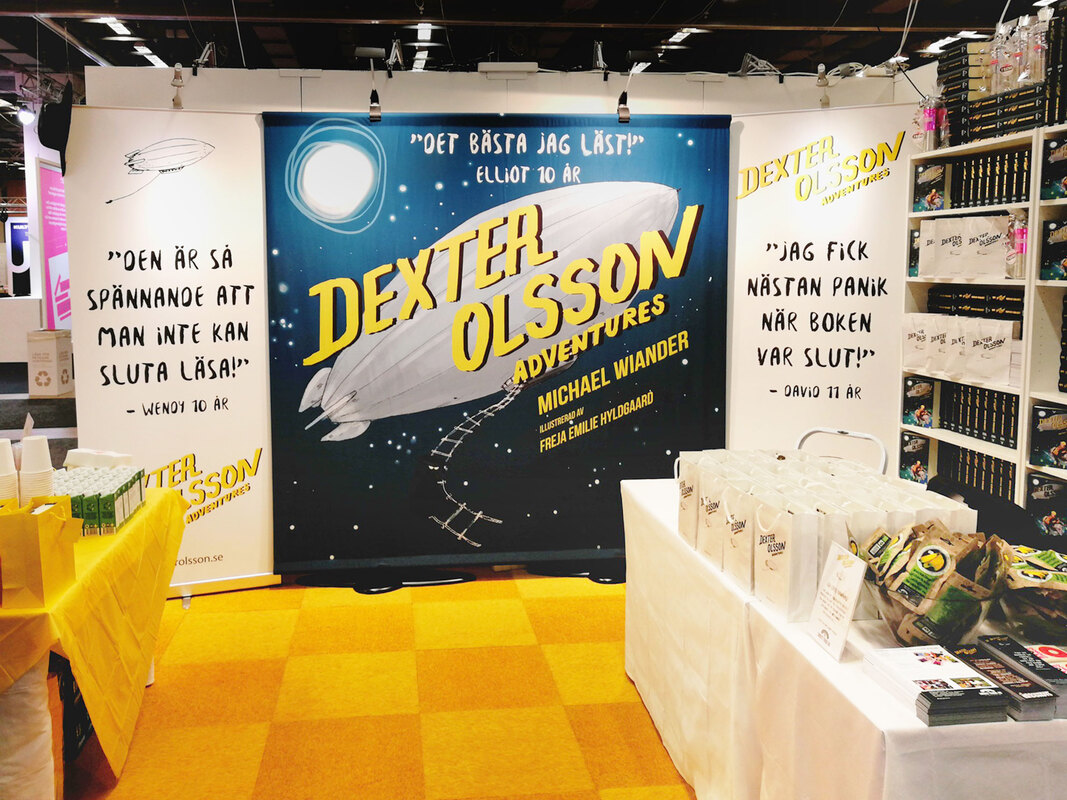 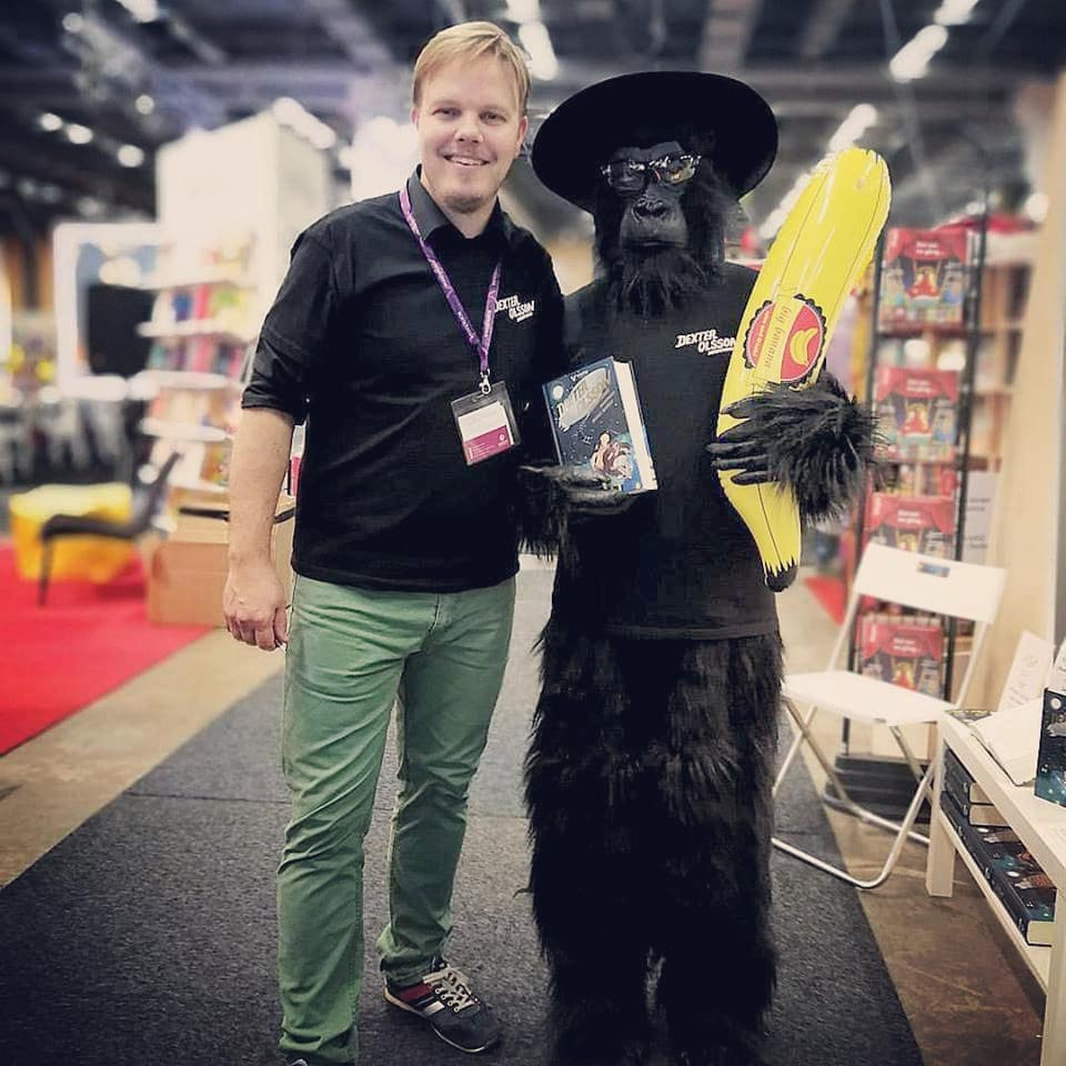 Gothenburg Book Fair, 2017, Michael Wiander & the monkey Thomas.
"Prior to the Book Fair i 'lived' in my car during a whole week, ate pasta salad and visited 8 cities."

I travelled throughout Sweden, from Sundsvall up north down to Malmö in south, and met in total 1.500 pupils during a weeks time - and this was all before the book was even printed (!). The week before Gothenburg Book Fair we also had a private book release in Stockholm with friends, who supported us in a nice way. When I arrived at the Book Fair, with my IKEA book shelves and two pallets with 1.000 books, I noticed that we had managed to enter the online top selling chart. This was probably a great part of the success. Another success factor was a collaboration with the largest Swedish chain of book stores (Akademibokhandeln).

"By autumn 2017 the book was reprinted and we sold thousands of books."

Great reviews flowed in, and before Christmas 2017, already in November, the book was sold out. We reprinted the book and even these books were sold out in short time, why we had to order a third and larger reprint. When part 2 in the series (Escape to Volcano Island) was released by autumn 2018, we had sold nearly 5.000 books and the success was now a fact. A somewhat crazy thing is our collaboration with Dunkin' Donuts, who sold the books in their cafés and even created a Dexter Olsson donut . ​ 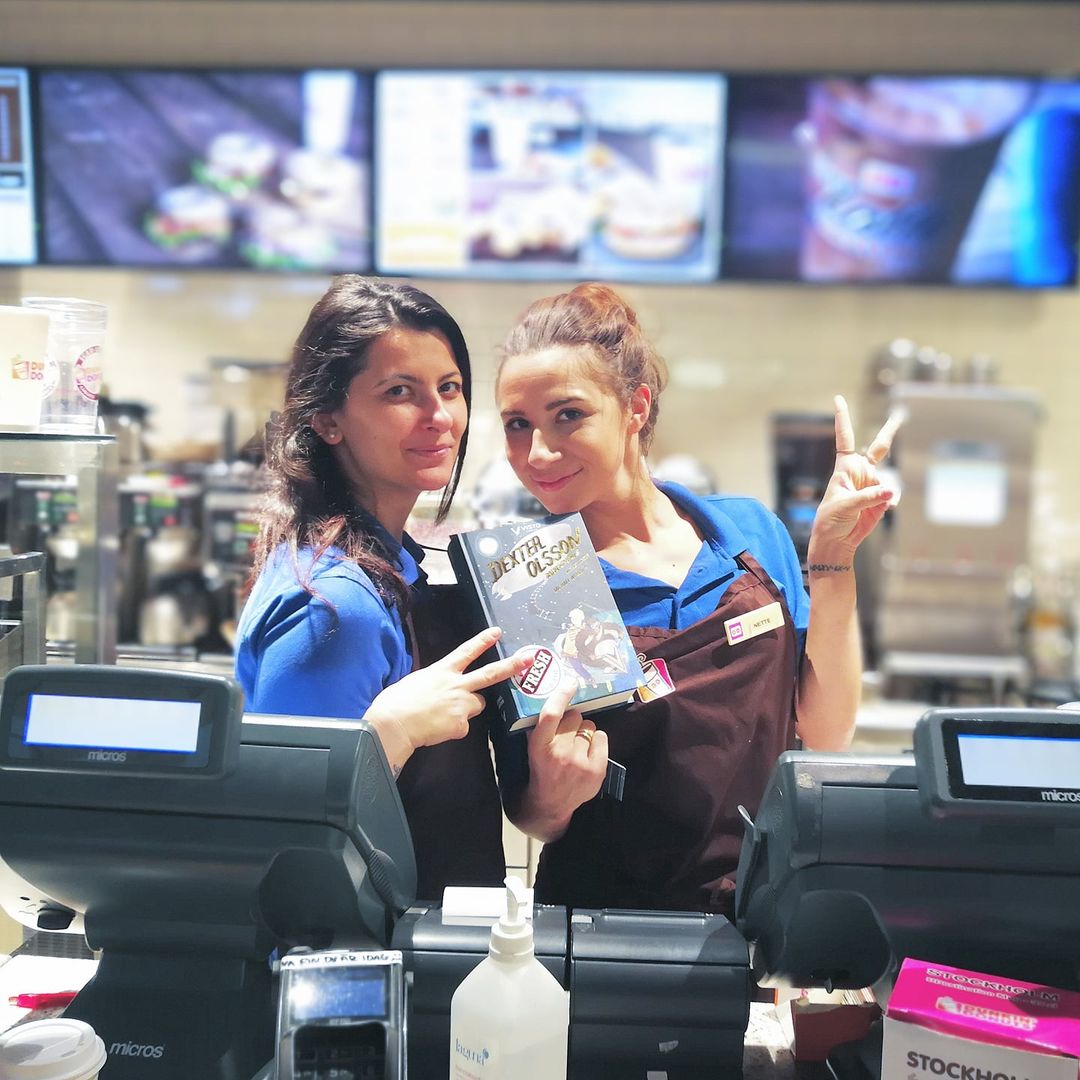 Dunkin' Donuts, Westfield Mall Täby C, 2017.
This was my son Marcus' idea, since I write about donuts more than 50 times in the book. When I said: 'Wy would Dunkin' Donuts want a book in their cafés?' Marcus replied: 'Dad, they will love you book!* And Marcus was right. The CEO of Dunkin' Donuts loved the book and we launched a fantastic, fun and successful cooperation. Within short time we had 10-15 events with Dunkin' Donuts in fancy public areas, and almost sold as many books as in the book stores. The Dexter Olsson donut was also one of the best selling donuts. ​​​ 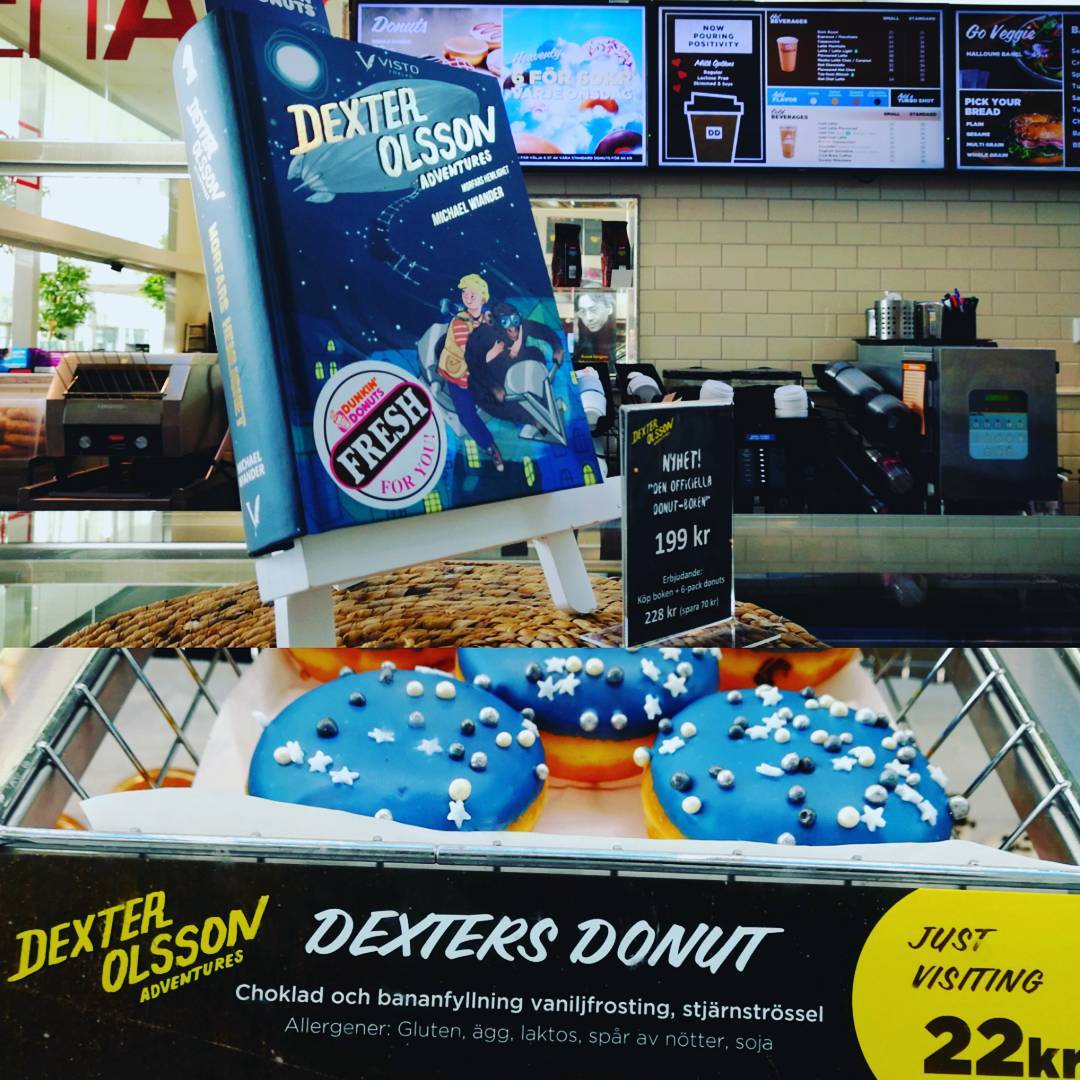 Together with Dunkin' Donuts, by the summer of 2018, we created a contest where all Dexter Olsson readers in Sweden were asked to create a new character. The winner was 11 year old Harry Askenstål (photo below), who created the character Julia Kostroff, who currently is many readers favourite character (the author's as well). Harry wanted a "game changer" and that is what he got!​ 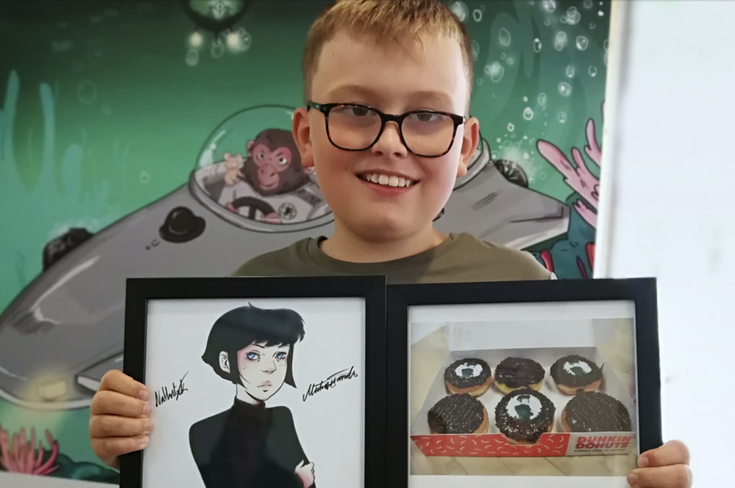 Harry Askenstål, winner of the Dexter Olsson & Dunkin' Donuts Reader Contest, 2018.
The Reader Contest was followed by an Inventor's Contest 2019, together with The Swedish Inventor's Association (SUF). The Contest was won by 9 year old Lukas Åkerblom (photo below), who's contribution 'The Slime Gun' will be published in part 4. ​ 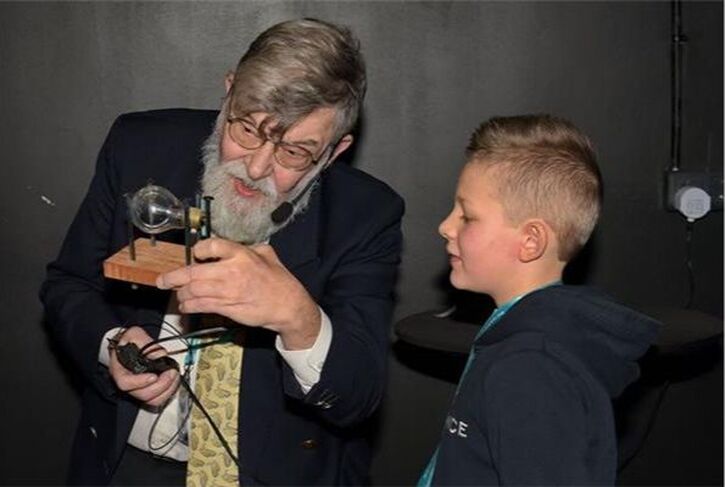 As a result of the huge sales success we initiated a collaboration with the sales agent Stevali Sales, who printed and distributed 25.ooo pocket books for free to Swedish schools and book stores. The sales figures doubled and part 3 (Luxor Prisoners) was sold out in less than a year. In addition to this the cook book 'Maria's Chef School', with recipes from the Dexter books, won the award for the best Swedish Cook Book for Children (Gourmand Awards) and was the Nbr 1 top selling Children's book online in December 2019. 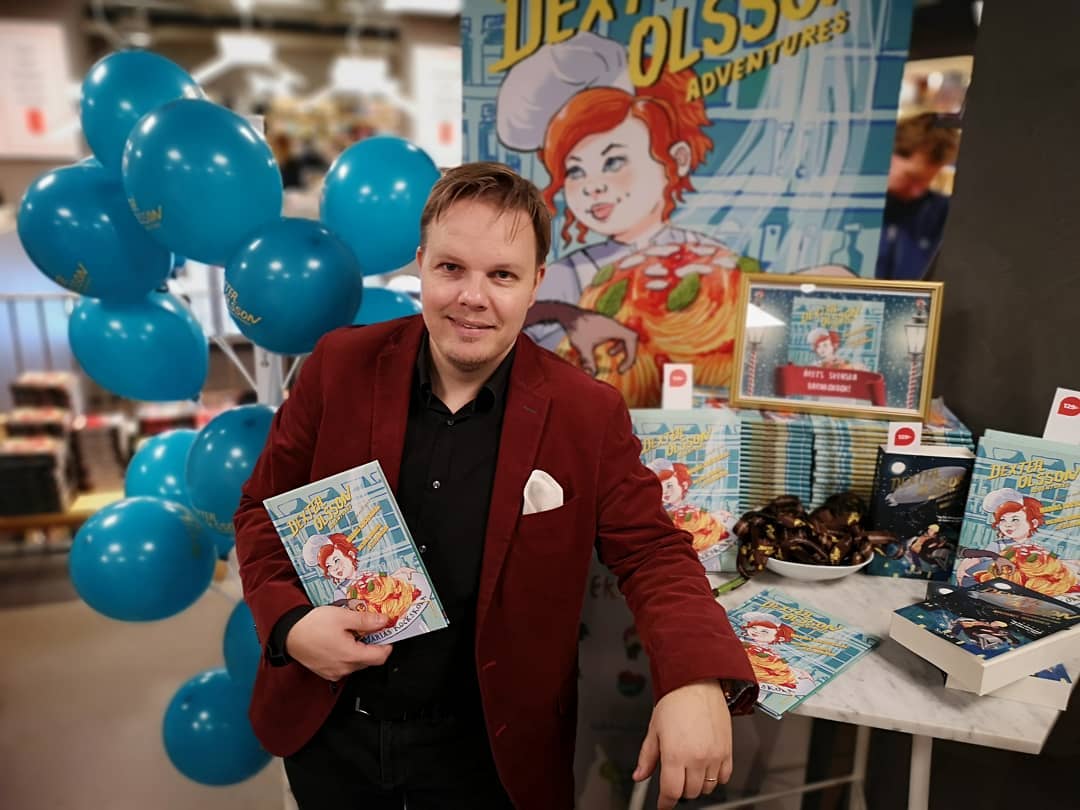 After the first successful years we felt that we wanted to work with a traditional Publisher. This resulted in a short publication break 2020-2021. During this period in time we let our fans take part in chosing new covers, logo and illustrations, and worked through the old books together with a professional editor. By the autumn 2021 we signed a contract for the new editions of all Dexter books with the Publisher Idus förlag. The first part,  'A Secret World' (formerly 'Grandpas Secret'), was released at the Gothenburg Book Fair 2022. 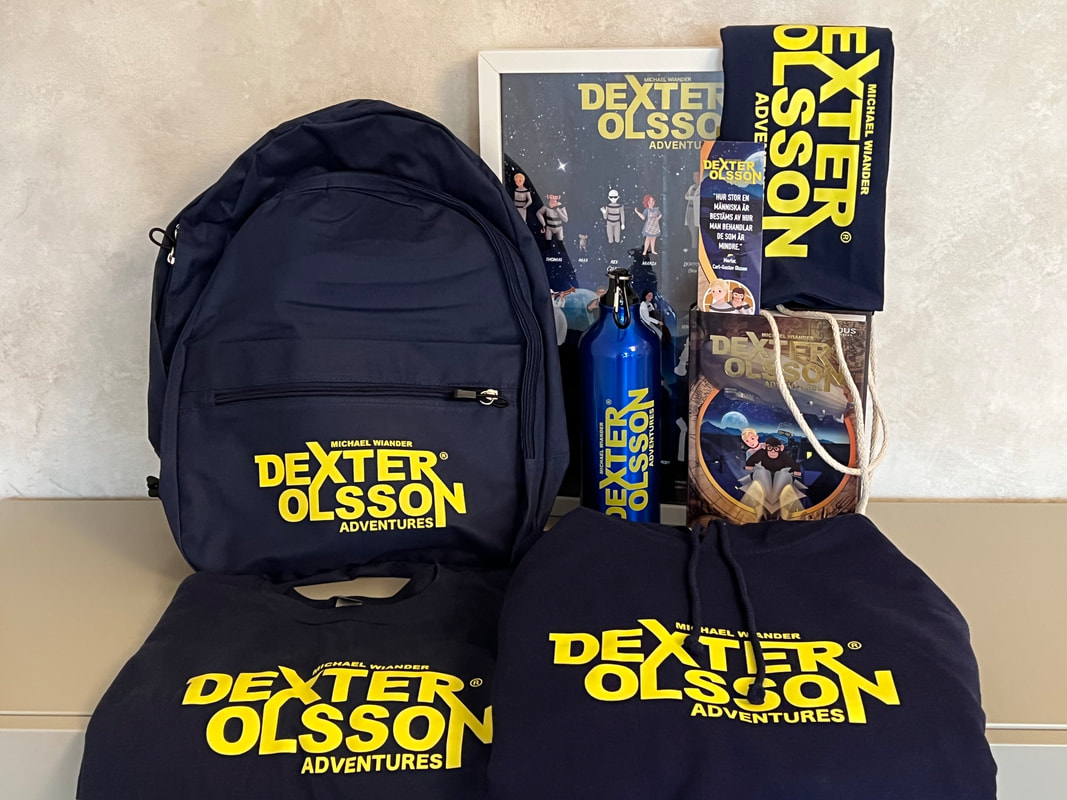 Both book stores and publishers were sceptical, since it´s commonly known that new editions of old books are hard to sell, if the book hasn´t reached exceptional popularity. That the new edition of Dexter was sold out in short time, is therefore the ultimate evidence that the book has really found a place in the hearts of the Swedish people. In a commercial movie, recently recorded together with the famous book blogger 'Gustavs bokhylla', we learned that 'Anyone can read Dexter' - regardless of age. Reviews from kids who read all books 3-5 times started to flow in, and suddenly we realized how big our project had grown.
Filmed interviews with Dexter-fans, 2022, moderated by book blogger A-C Hellstrand.
"By autumn 2022 Dexter has reached +50.000 readers and +2.000 reader reviews."

The fact that Dexter has reached so many readers is thanks to collaborations with LegiLexi (jagharläst.se) and Mediapoolen (digitalpedagogik), where the first book in the series (Grandpa's Secret) was free to download during several years. The book has been sold in 30.000 physical copies, borrowed at the library +20.000 times, distributed for free in 25.000 copies and downloaded thousands of times (not to speak about all online streamings). We also have hundreds of fantastic script readers to thank for the success. Without them the journey would have been very different - since from the very beginning we have got more than 500 survey responses from these young talents.

I surely forgot to tell you half of the story, for example that I have met +10.000 pupils in Swedish schools, performed +200 events and trained nearly 2.000 kids in Poetry, but the single most important success definitely is that the book has found such a broad audience. One of our first reviewers concluded this in a very fine way:

"Frankly speaking it's not possible to resist Dexter Olsson, I like the serial more and more with every new book and I am definitely not the only one, it's actually as fun to read both for children and for grown ups."
​- Boklysten, Book blogger​​ 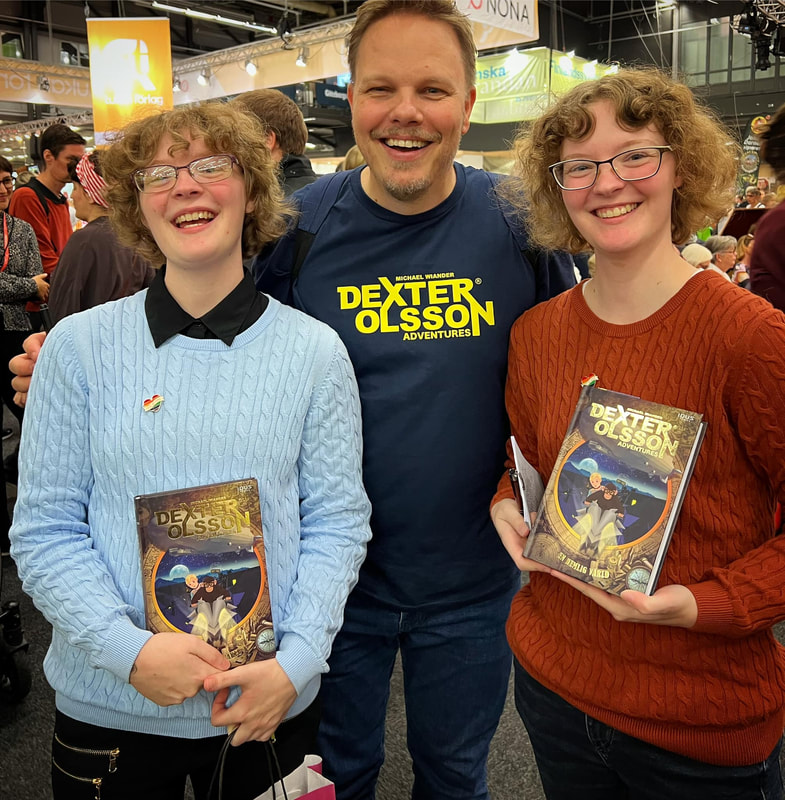 Grown up readers? The twins Felicia & Bianca at the Gothenburg Book Fair 2022 with one Dexter book each.
Test read the book